Fake VS Real Drums for Metal: When (and How) to Use Both

Challenges Metal Musicians and Bands Face (and How to Overcome Them) 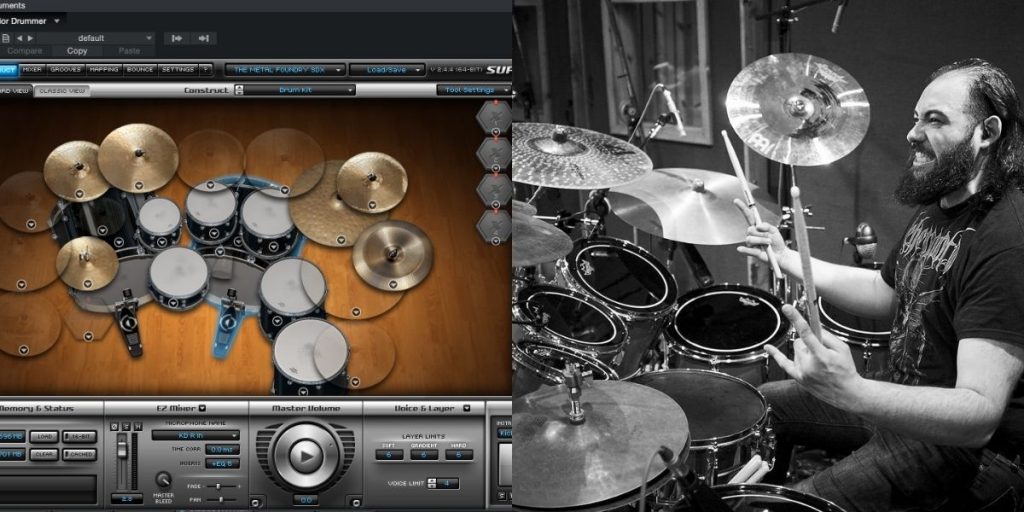 One of the amazing things about modern metal music mixed with technology is that we now have a butt-load of options in the studio. You can move things around and make, seemingly, perfect music.

However, for that same reason, many of us metalheads feel that technology has played a role in the degrading of metal music, stealing the life out of it.

And when it comes to metal music, one specific degradation is the use of programmed drums, or what we like to call fake drums.

But is there a place for programmed drums in metal music?

In this post, we’re going to show you different scenarios where it may be appropriate for you to use fake drums in your recording process and when you should consider using real drums.

And if you’re not a drummer, we’ll also give you some tips on how to find and hire a real drummer for your song or album…when you want to use real drums!

Of course, we are talking about metal music here. But these concepts in this post should really apply to all music genres with the potential exception of electronic/techno styles where programmed drums are the norm.

First, let’s understand why anyone would want to use programmed drums over a real drummer in the first place.

Well, there are several reasons, and they all sound legitimate at a glance…

None of these area reasons to use programmed drums. They are mere excuses! (Silly plebeians… lol)

And, sure, with the enhanced drum programs, you can edit the drum velocity of each individual hit, and even move them around so that they don’t sound so robotic.

But here’ something to think about. Drums are more than just sounds.

No program can replace the energy and feeling you get from a real metal drummer recording drums. So you really have to ask yourself this question: Is your music important enough to have a real drummer record drums?

Situations Where it’s Okay to Use Programmed Drums

In spite of the above, there are situations where using programmed drums can be helpful. So don’t delete your drum program from your computer just yet!

Using programmed drums can help with the initial songwriting process. For example, if you’re a guitarist you can use a drum program to record your initial ideas. After all, it’s far more inspiring to record our fast metal rhythms to drum beats as opposed to recording to a boring click track.

Programmed drum tracks can also be a great tool to give your drummer a basic idea of how you want the song to flow. This can come in really handy if you’re a solo artist who ultimately wants real drums on your record.

You’ll have an example to provide to the drummer to give them an idea of the type of beats you’re looking for and where the different breaks are in your song.

*We still encourage you to give the drummer the freedom to record what they feel sounds best and fits your music. Remember, they’re the drummer and you’re not.

Or maybe you’re recording general song ideas or song clips to share on places like social media, YouTube, or Soundcloud. It’s probably not feasible to hire a real drummer for that.

When to Use a Real Metal Drummer

You should consider using a real drummer who plays real drums for anything you’re going to release professionally.

This could be a song, EP, album, or music that’s made for professional use.

If you’re releasing your music to the world as a band or artist on platforms like Spotify, Apple Music, Amazon Music, YouTube Music, etc. and/or releasing a CD (or vinyl!), hire a real drummer for the final result.

Having real drums in your music will…

We could go on and on, but you get the picture. A drum program is just not going to cut it for pro releases, especially for metal music. You need a real and professional metal drummer if you want your music to be considered quality music.

Tips for Hiring a Real Drummer

Hiring a real drummer really isn’t difficult. And there is an abundance of musicians in general always looking for work.

Nonetheless, here are some tips for finding a real drummer you may find helpful…

Let’s step back for a moment. It’s important to know that just because you hire a real drummer doesn’t mean you’re going to have an awesome sounding metal song or record.

Not all drummers-for-hire are equal. Playing drums for metal music adds an entirely different level of complexity. And you also need to make sure that the drummer you’re working with either has or has access to a professional studio to record (most pro-drummers-for-hire have a pro setup in their home).

You need to make sure that you are hiring a professional drummer that has a solid track record. Listen to other projects they’ve recorded.

Even if they are a metal drummer, they may not be the best fit for the specific type of metal that you play and write. So just remember that.

Also, be willing to pay a fair price. In other words, don’t be alarmed at the rate that professional metal drummers charge.

Playing metal on drums requires a tremendous amount of skill, as mentioned earlier. And the time, space, and equipment to record real drums is quite intense and far beyond what other instrumentalists require.

The Metal Mastermind Philosophy on Drums

As you may have guessed, our stance on drums is to always use a real drummer for music that you plan to release professionally. It’s just going to sound better.

Even with the most sophisticated programs, which now many are mimicking the human factor, you cannot truly replace or replicate a real drummer. A real drummer is just going to have these nuances that give your music more life and authenticity.

Don’t let the machines take over! Hire a real drummer!

In fact, there are countless drummers for hire that record for bands and artists like you on a regular basis. And many of these have their own studio and can give you a reasonable turnaround for high-quality drums.