One of the most challenging things about writing your own music is getting it to sound original and authentic. In other words, you don’t want to write a new metal song that sounds like every other metal song!

Sure, we all have bands and musicians that we admire. Naturally, those influences will come through a little in our own songs.

But the last thing you want is for someone to hear your new song and say ‘Oh, cool, that sounds just like Master of Puppets!’ or any other song!

One awesome solution to this is to learn how to use key changes in your metal songs. And I’m going to show an easy way to do that in this post.

Before you start diving into changing keys in the middle of your song, you want to first know what notes make up the key that you’re changing to. The easiest way to determine this is by using the circle of fifths.

It also shows you the relative keys. And knowing this actually makes it easier to find keys that work best with one another.

For example, let’s say your main riff is in the key or E minor. If you look below, you’ll see that B minor and A minor are right next to E minor. This means that many of the notes in those keys will overlap, making the key change a smooth one.

Of course, these are ‘hard-coded’ rules. There are no rules to music!

However, it is important to know which notes make up the key that you’re in. And it’s helpful to know which keys may flow together. This can help your songwriting process be smoother.

***If you’d like to learn more on how to use the circle of fifths, check out our post: Circle of Fifths Explained for Guitarists

Song Structure and Arrangement: Where to Use Key Changes

Now that you have more knowledge of the keys, it’s time to determine where you want the key change (or key changes!) in your song. This is referred to as the song structure and arrangement of your song.

Below are the musical arrangements that make up your song’s structure (most songs have at least two of these). And these are all opportunities for key changes.

One of the best examples of this is ‘Poison’ by Alice Cooper. Both the verse and chorus have key changes within each.

You may also have what I call transition riffs that are often used between pieces of music, such as the verse leading into the chorus, or chorus to bridge, etc. This is common in metal music.

An example is the song ‘Wishmaster’ by Nightwish. You’ll notice some short transition riffs between the verse to chorus and after the chorus. Though there are opportunities for key changes here, these transition riffs are typically in the same key of that part of the song due to their short length.

Most metal songs also have sections for guitar solos. And sometimes these may be a different arrangement that any other part of the song. This is also another opportunity for a key change.

It can also be a convenient one! Let’s your singer is comfortable with a particular key but the lead guitarists shines more in a different key. You could arrange the song to cater to both!

How to Transition from One Key to Another Smoothly

So far, key changes sound cool and you’re probably ready to start implementing them into your metal songwriting!

But one of the challenges can be creating a smooth transition between the two keys. Whereas have multiple keys in your song can make it pop it can also be disastrous and potentially ruin your song.

There are two things to consider in regards to changes keys vs. not changing keys:

Let’s assume you’re moving forward with adding a key change to your song. Here are some ways to make that transition between keys smooth:

These are just ideas that can help your songwriting process flow. It can also promote fresh ideas and prevent frustration!

Wha About Key Changes that Do Not Go Together?

One of the beautiful things about metal music is that we can literally be all over the place, musically. In fact, that’s one of the elements that define some sub-genres of metal like black metal, death metal, deathcore, and a few others.

These keys are so far apart from one another that they don’t share any of the same notes. You’re going to get a completely different sound and vibe, perhaps one that is dark and sinister (hence the sub-genres I just mentioned!).

Watch on YouTube: How to Use Key Changes in Your Metal Songwriting and Progressions

Breaking the Perceived Rules in Music with Key Changes

It’s often misunderstood that you have to follow certain rules based on music theory. Music theory is not intended to be a set of rules. It’s only a guide to help you connect the dots. And that can make the process of writing songs, tying riffs to progressions, and implementing key changes a lot easier.

But don’t mistake the things that we discussed in this article for rules. There are no rules in music. There is only what fits the nature of your song and captures the vibe that you’re going for.

Sometimes that could be a simple 3-4 chord progression for the entire song. But more than often, metal music has more complexities. And that means there are plenty of opportunities to use tools like the circle of fifths to map out potential key changes for your song.

I truly hope this articles helps you and gives you some fresh ideas for your metal songwriting. And I encourage you to save this page so that you can refer back to it every time you write music.

***Do you have our songwriting course? Learn more here 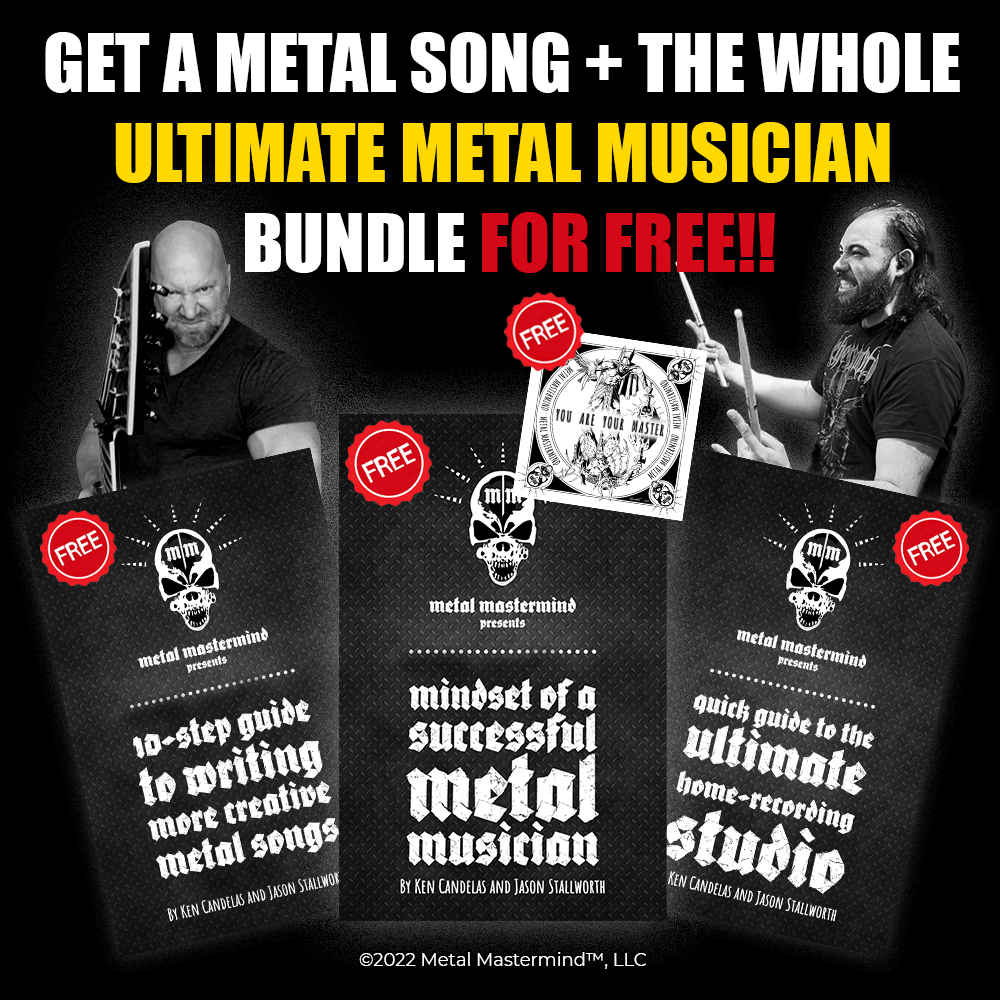