INTERACT WITH US, LIVE!

Subscribe to the Metal Mastermind YouTube channel and ding that little bell to get awesome content that will help you grow as an independent musician. We go LIVE every Wednesday at 12:00 PM (EDT). You don't want to miss it! 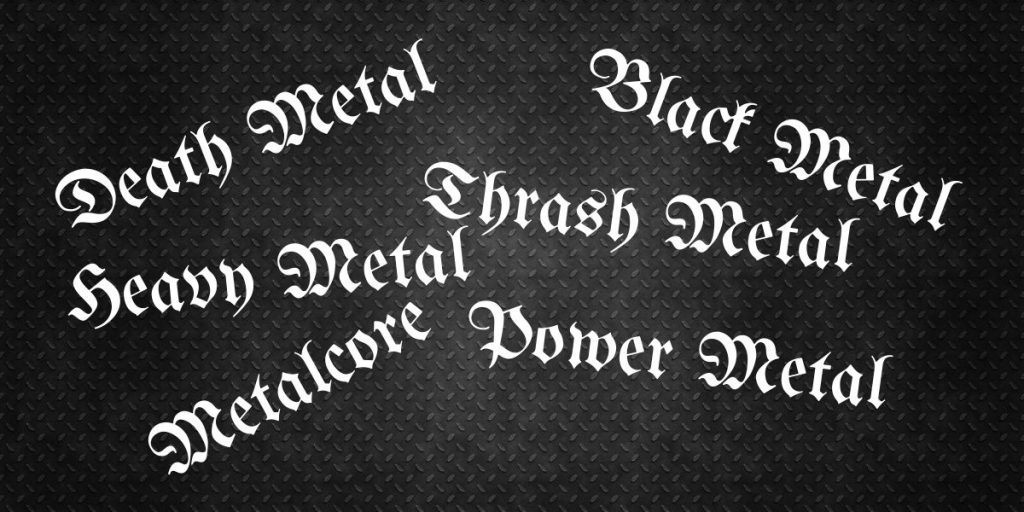 How many subgenres of metal are there?

If you were to answer this now you would be wrong tomorrow…or perhaps even sooner!

The list of subgenres of metal music continue to expand. This often comes from combining higher level genres together. A good example is melodic death metal, which was originated from both heavy metal and death metal.

In this post, we’re going to give you a breakdown of what we call the founding metal subgenres and how they were formed. We’ll also list a few metal bands that represent each style.

Just a few ‘notes’ before we move on…

Here are the contents in case you want to skip down to your favorite subgenre:

So that we only reference this one time, some of the information we’re getting is validated against one of the coolest tools on the internet called the Map of Metal.

This is a comprehensive list of all of the subgenres, their timeframes, origins, and they even have a playlist of metal songs under each subgenre that you can listen to! Yeah, it’s pretty badass.

Click here to check it out (this will open a new browser so you can listen to the songs while continuing to read this post!): Map of Metal

**It’s important to note that some of our band to subgenre lineups may be different from what you see on the Map of Metal, based on our opinion.

Created in the early 70s

Let’s start with good ole classic heavy metal. This really defines the line between hard rock music and what we know as the metal genre as a whole.

Heavy metal was brewed mostly between the United States and United Kingdom. These bands essentially made it their mission to take their rock and roll and blues influences to a completely different level, creating a unique and unmatched sound and attitude.

It’s safe to say that Black Sabbath is responsible for creating the first true heavy metal style of music in the early 70s, 1970, to be exact. Some will argue that bands like Led Zeppelin, Deep Purple, and KISS were also co-founders of metal music, but these bands were more rock, or at best, hard rock.

Created in the early 80s

Everything in music changed when thrash metal hit the scene. And the band that started it all is known as one of the biggest metal bands in the history of metal, and everyone knows their name: Metallica.

Soon to follow were three other bands, which made up ‘The Big 4’ – Megadeth, Slayer, and Anthrax (there are many metalheads who feel that Testament should have been a part of this group!).

Thrash metal formed from the deepest pits of aggression, loudness, and fast guitar riffs. It had the same rebellious attitude as heavy metal, but x 10! America was the culprit of thrash metal music, but Germany also had a tremendous presence of thrash bands.

Created in the mid-80s

Just a few years after the rise of thrash metal, a new, more extreme subgenre was created: death metal!

The vocal style is what defines death metal. The music, for the most part, is also faster than traditional heavy and thrash metal. Although many death metal bands are also known for those breakdowns in the middle of the song that just hang on those chunky, palm-muted power chords!

There was a tremendous death metal movement that started almost simultaneously in two places across the globe: United Stated, specifically the Tampa-Orlando, FL area, which was once known as the capital of death metal, and Finland.

Created in the early 80’s

Power metal is close to thrash metal but without as much aggression, and often has a neo-classical twist. It’s filled with anthem-like progressions and melodic, in nature.

Another distinction is power metal bands typically have ‘clean’ vocals. Many power metal vocalist also show off their superior range.

Created in the late 80s

Progressive metal is known for its complex music structure and mastery of their instruments. Many musicians are fascinated with these bands’ theory-driven guitar riffs and technical drumming.

The vocal styles in progressive metal are similar to that of power metal, clean and often getting up there in range.

The early progressive metal bands got much of their influence from rock bands like Rush. And some of the heavy metal bands like Sabbath and Priest had an impact on the formation of this subgenre.

Created in the early 80s

Black metal started as a rebellion towards Christianity, often colored with satanic themes. Paganism is also part of this subgenre.

A shrieking sound the prevailanet vocal style of black metal. The music is fast and is known for its unorthodox progressions.

Created in the early 90s

Symphonic metal is a combination of heavy metal and power metal, and sometimes with hints of progressive metal. What makes this style unique is it includes orchestration and typically a heavy presence of keyboards.

Created in the mid-90s

Melodic death metal was born out of Sweden in the mid 90s. The band At the Gates is said to founder of this metal subgenre.

The style is heavily (no pun intended) rooted in death metal, specifically the growling vocal style. And while the music is heavy, there progressions carry distinguished melodies.

Many melodic death metal bands also have symphonic elements that includes keys and orchestrations to support the carry the melodies.

Created in the early 90s

Metalcore bands took the metal scene by storm in the mid-90s. Their blast beats and intense double bass seem to be influenced by death metal. However, there’s an underlying melodic vibe to metalcore.

But the biggest thing that separates metalcore from other metal subgenres is the vocal styles. While there’s plenty of screaming, there are also parts in songs that have ‘clean’ vocals. That’s an interesting contrast that’s the heart of metalcore.

So those are the core subgenres of metal. You can pretty much most other subgenres back to one of these. And these styles continue to evolve, which is an awesome thing.

But at the end of the day, it’s all metal, and that’s the music we love!

Every Wednesday at Noon (EDT)