Beginner’s Home Recording Studio Setup for Musicians on a Budget

Challenges Metal Musicians and Bands Face (and How to Overcome Them) 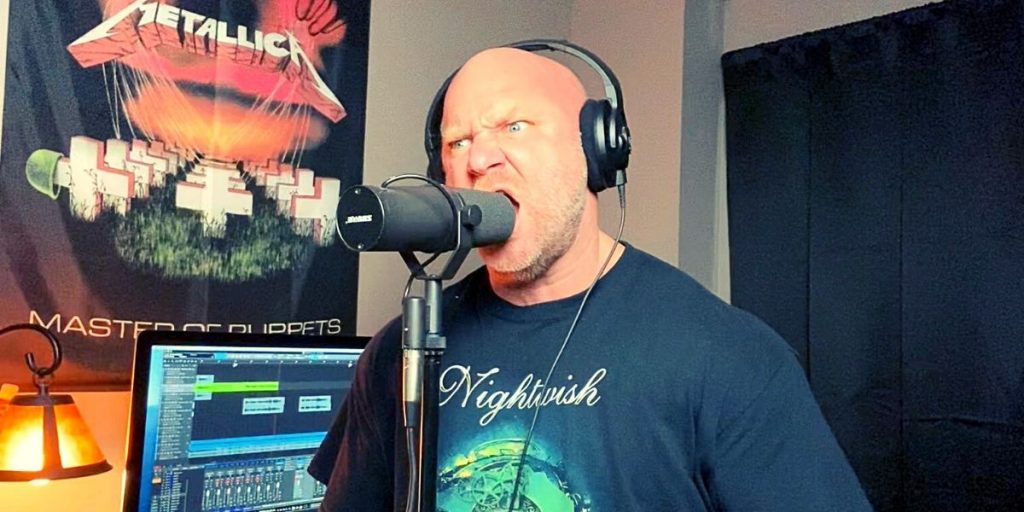 The guitar and bass tracks are done and your drummer just finished their studio session yesterday. Now it’s time for you to get in there and record your metal vocal tracks!

But there’s one problem…you don’t know what mic to use, and your band’s budget is super tight right now (the guitar player just had to have those expensive-ass monitors!).

That’s okay because we’ve got you covered…

In this post, you’ll learn about 7 of the best microphones for recording metal vocals. And the best part is each mic is under $500 (a few of them are only $100!)

We’ll start out with the most common mic for death metal and extreme metal vocals. The Shure SM7B.

The SM7B is a cardioid dynamic mic with a wide-range of frequencies. But it’s also great at handling even the most extreme metal vocals.

What metal singers love so much about this mic is that it helps them keep the true tone of their voice. The SM7B also delivers the clarity that would expect from a condenser microphone.

**In the below video, Glenn Fricker of Spectre Sounds demonstrates recording extreme metal vocals with the Shure SM7B:

The Electro-Voice RE20 is a dynamic mic that’s best known for broadcasting and podcasts. Because of that, it’s known to eliminate a lot of the background noise making is a good choice for extreme vocals.

What metal singers love about this mic is its built-in shock mount and the high-pass filter.

This mic is known to be used for recording guitars and you’ll often find it in front of a kick drum. But it’s been proven to be a solid choice for recording aggressive vocals.

The Sennheiser mainly serves vocals with screams and yells. The special feature this mic has is its ability to reject feedback and not picking up other sounds. It also has five bass roll-off selections so you can really get close to the mic and still get clarity.

Here’s the world’s most popular mic for recording loud metal guitars going though high gain amps! But there are countless singers and bands who have used this mic to record vocals in the studio.

The Shure SM57 is one of the most durable and trusted mics. It would be rare to find a studio without one (or several).

The reason why it works well for extreme metal vocals is the fact that is can handle those brutal growls and screams. It’s also going to give you more of your authentic voice.

**Here’s a video of a YouTuber doing a Lamb of God cover with the Shure SM57 (and comparing it to several other mics):

The LCT 240 Pro is said to be a budget-friendly mic for beginners and studio professionals. Where it really shines is for home recording, podcasts, and broadcasting. It can also be used for instruments.

The versatile cardioid pattern is what makes this mic work for a variety of vocal styles. In fact, Warren Huart states that he recorded an entire album with this mic in his article ‘Recording a full band with a $149 mic (LCT 240 Pro)‘ – (warning, this dude’s music is not metal).

What makes the LCT 240 mic work for metal vocals is it’s simplicity. There are no switches, roll-off features, or different polar patterns. It’s just a plain condenser, and sometimes having that simplicity makes it easier to work with.

**Here’s another video from Glenn Fricker which at one point he highly recommends the LCT 240 Pro for metal vocals:

The NT2-A is a large-diaphragm condenser microphone and is basically an upgraded version of the NT2. It has a three-position pick-up pattern with a high-filter switch.

The mic is said to have a vintage-style character, capturing the essence of the 50s and 60s. Yet, it’s designed to be enhanced with modern recording methods.

Why is it a good choice for metal vocals? For one, it’s going to provide clarity to your vocals, which styles like death metal need that extra boost so that it doesn’t sound like gibberish. Secondly, unlike many other condenser mics, the NT2-A is not overly sensitive to extreme vocals.

**Mary Z of Voice Hacks demonstrates different types of extreme vocals using several mics, one being the Rode NT2-A (we think this one sounded the best…you’ll see our comment in her video from Metal Mastermind – find it, and comment on our comment!)

I know we’ve already covered two Shure mics and you may think we’re biased at this point. But Shure just makes some high-quality mics that are budget-friendly. And the mics we’re mentioning from Shure are all equipped to handle extreme metal vocals.

The SM58 is known for being sturdy and rugged, which is why it’s used so much on tours. But what about recording metal vocals with the SM58 in the studio?

Think of the SM58 as everything you’d get from the SM57 but with more vibrance and a clearer sound. Like the SM57, it will hold up against those harsh screams, yells, and growls.

**Here’s a metalcore scream test with the SM58:

Hands down it’s the Shure SM7B microphone. I recorded the vocals for my 2019 release, Masterpeace. And that album has a mix of melodic death metal and thrash metal vocals, and there’s even a couple of black metal-style screams. This mic is a beast and handled all of those vocal styles extremely well!

The SM7B was used for my side project Four Trips Ahead’s albums every time. You can’t go wrong with what could be considered on of the go-to microphones for rock and metal. When it comes to clean vocals, I love using condensers such as Antelope’s Edge Duo. It’s a powerful microphone with virtual mic emulation capabilities!

We hope you enjoyed reading this post. And now you have some awesome mics to choose from to record your extreme metal vocals that won’t break the bank!